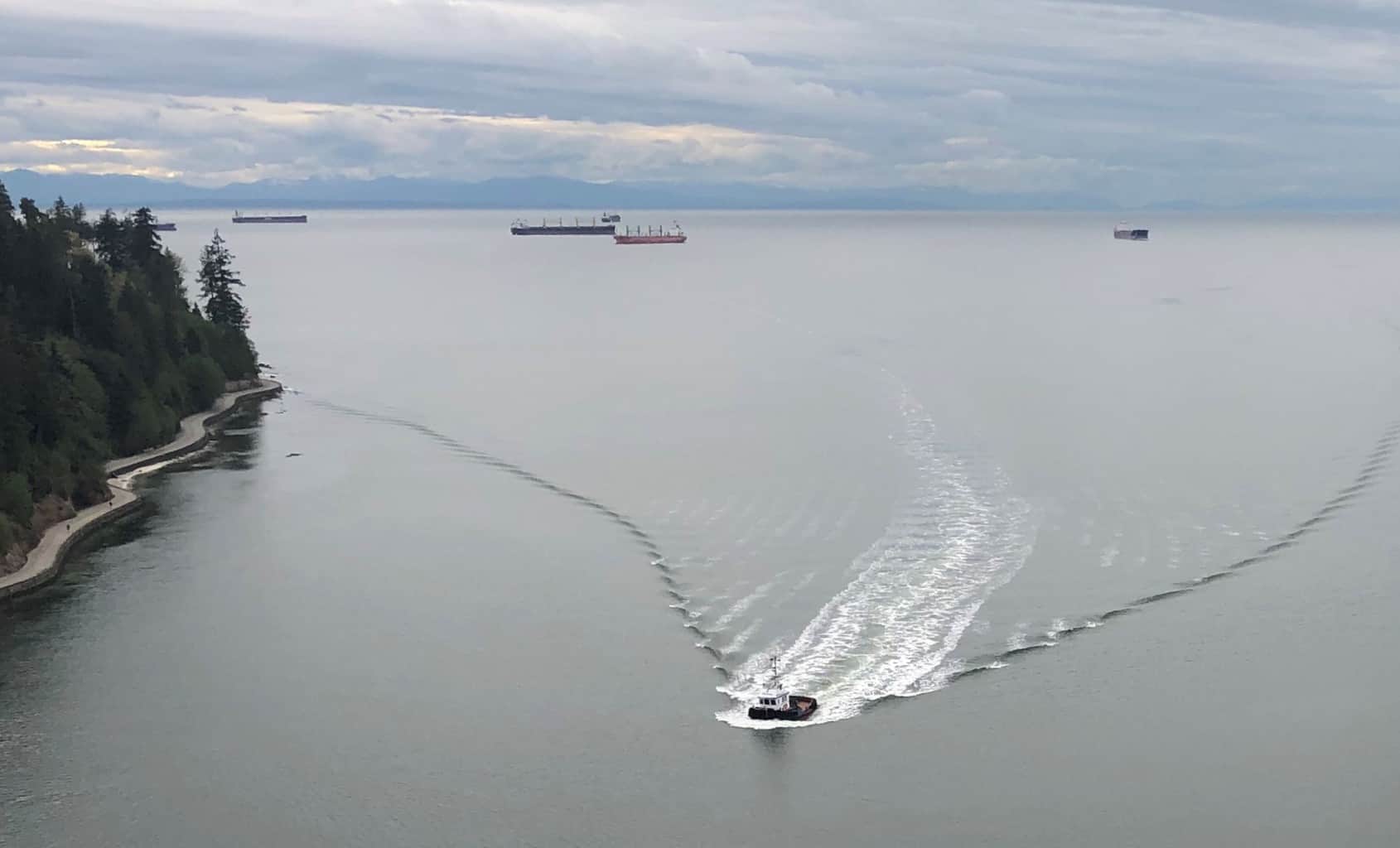 For years, Tsleil-Waututh Elders and Nation members have observed erosion on the shores of Burrard Inlet coinciding with increased marine traffic. This erosion affects the Tsleil-Waututh community in innumerable ways as it compromises important cultural places, damages archaeological sites, and degrades key shorelines and beaches. This week, the Tsleil-Waututh Nation (TWN) is applauding the publication of new research reporting the relative contributions of vessel-generated wakes and wind waves to the overall wave energy in Burrard Inlet, undertaken alongside subject-matter experts, MarineLabs and Kerr-Wood Leidal. This report is an important piece of the puzzle for Tsleil-Waututh’s ongoing work to protect the lands and waters of Burrard Inlet. You can read the report here.

Among the key findings, the report demonstrates that:

The results show that vessel traffic does indeed contribute to waves in Burrard Inlet, and these findings can inform policy and development related to increased vessel traffic. For example, this study detected wakes from a monthly average of 242 tugboats; however, if built, the Trans Mountain Pipeline Expansion Project (TMX) will increase tugboat traffic in Burrard Inlet significantly. Two to three tugboats will accompany each tanker, resulting in up to 10 new tugboat trips per day. This means if the pipeline is built, there could be an additional 300+ tugboat trips per month, more than doubling the already significant waves from current tugboat traffic.

And this is just the tugboats! On a per-wake basis, tankers themselves are the most likely vessel to produce the most powerful waves categorized in front of the TWN reserve. The study detected wakes from an average of six tanker transits each month, but if the pipeline is built, there will be an estimated 60 tanker transits per month, representing a potential 900% increase in wakes from tankers.

Relevant policies and regulations must consider these marked increases in tankers and tugboats, as the corresponding waves pose undue and unnecessary risk to the cultural and ecological landscape of Burrard Inlet. TWN has lived on the shores of Burrard Inlet and Indian Arm since time immemorial and many cultural activities such as canoeing and ceremonies rely on calm, safe water. Today, vessel traffic disrupts the calm waters and casts waves onto eroding cultural and archaeological sites which represent irreplaceable insight and connection to the ancient and longstanding history of these lands. Moreover, the footprint of the Nation’s reserve lands are being lost, as front yards erode and flood in the TWN community. Changes in wave energy also disrupt nearshore ecosystems, and rising sea levels caused by climate change will exacerbate the effects of increased wave action and erosion. While this study connects vessel traffic to increased wave energy, future research is necessary to understand specific impacts of waves on these numerous priorities.

These results also establish the need to consider local vessel traffic in its entirety, rather than on a project-by-project basis. Incremental changes from individual projects may be nearly imperceptible by themselves, but this perspective ignores the effects of innumerable small changes over generations. Imagine sitting in a torrential rainstorm and asking, “Which rain drop will cause the flood?” Clearly every drop contributes a tiny amount to rising waters, so none are to individually blame. Rather, TWN would measure when the total water level would exceed the riverbanks, and manage for that scenario. Unfortunately, governments, regulators and proponents have been pointing at individual raindrops to show how small each one is, while TWN has been forced to contend with a flood of impacts for generations.

This report demonstrates that site-specific empirical studies are crucial to inform impacts from vessel traffic. Contrary to this approach, in the 2016 National Energy Board (NEB) hearings on TMX, Kinder Morgan suggested that project-related marine shipping would not affect waves in Burrard Inlet, based on a desktop review of wave conditions not specific to the local environment. At the same hearings, TWN presented written and oral evidence stating that the wake from project-related marine shipping posed a risk of increased erosion. While the NEB sided with Kinder Morgan, this new study contradicts their desktop review, and buttresses the knowledge and lived experience of Tsleil-Waututh Elders and community members – the experts of their territory.

Despite this, regulators continue to rely on flawed desktop reviews of impacts of marine shipping. For example, the Province of BC is currently in the last phase of reviewing the Trans Mountain Expansion Project BC Environmental Assessment Certificate conditions, but is still relying on the 2016 NEB decision to dismiss TWN’s concerns related to increasing vessel traffic. At this time, the public has until March 1st to review the draft conditions and submit comments. TWN’s concerns are included in the draft document. Follow the link here to read the draft report and submit your comments.

Indigenous management is guided by local expertise built on foundations of ecologically and culturally accountable stewardship protocols and laws from time out of mind. Our experts know that marine shipping must be rigorously evaluated through the lens of cumulative effects, climate adaptation and impacts on culture and cultural heritage. We hope you agree, and that this important new research takes us a step further in communicating across different perspectives to restore the health of the Inlet.