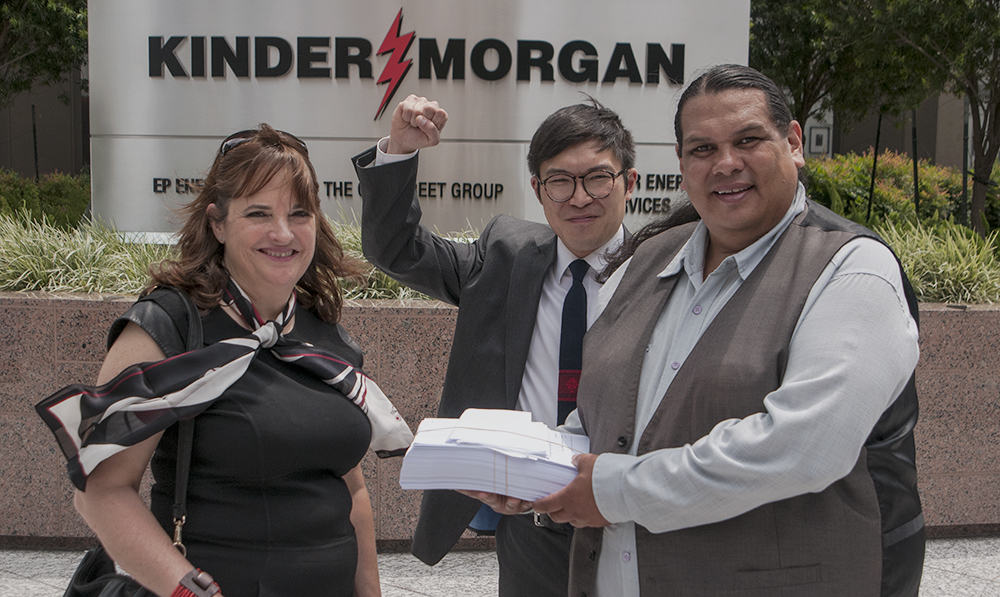 HOUSTON, TEXAS – Thursday, May 7th, representatives of the Tsleil-Waututh Nation, the â€œPeople of the Inletâ€, attended Kinder Morgan Inc.â€™s (KMI) Annual General Shareholder Meeting in Houston to state their steadfast opposition to the corporationâ€™s planned expansion of the TransMountain pipeline and tanker project. The pipeline, storage, and marine shipping facilities are in the heart of Tsleil-Waututhâ€™s traditional territory, and the expansion project would result in more than 890,000 barrels of crude oil being exported by tanker through Burrard Inlet and the Salish Sea daily.

â€œIâ€™m here to tell you that Tsleil-Waututh Nation will never consent to the Trans Mountain project.â€ George stated at the meeting. â€œAnd we have the legal tools to stop it. We have disqualified the project in our own Indigenous laws. Our rights are also entrenched and protected under the Canadian Constitution and we will use all legal means necessary to stop the project.â€

â€œOur community voted unanimously to oppose this project because the risks are too great and far outweigh any supposed benefits.â€ Said Chief Thomas.

â€œWe know that spills happen and when they do they canâ€™t be cleaned up. And that is why we will stop the pipeline expansion for our future generations and those of everyone else who lives around the Salish Sea.â€

Mr. George also delivered a petition demanding Kinder Morgan to respect Indigenous rights and abandon the project. The petition garnered over 58,000 signatures in less than 48 hours.

â€œThe Tsleil-Waututh are not alone in opposing this reckless project.â€ Said George to Mr. Kinder. â€œSeveral other First Nations, US Tribes and the public in BC and around the world stand with us in saying â€˜this pipeline will never get built.â€™â€