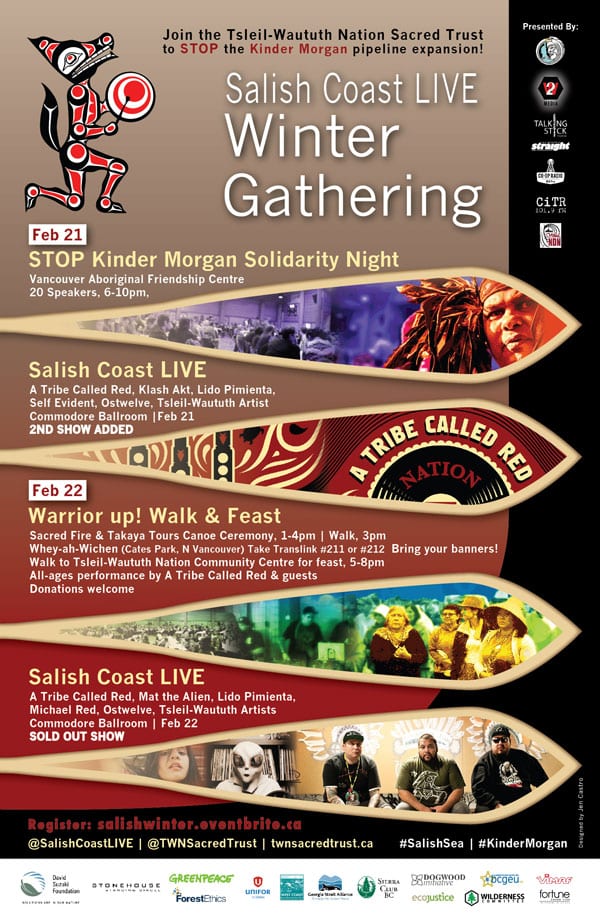 A gathering to honour Tsleil-Waututh culture, land & water in the face of a proposed Kinder Morgan pipeline expansion.

Hosted by the Tsleil-Waututh Nation Sacred Trust, the two-day Salish Coast LIVE Winter Gathering brings together Indigenous and non-Indigenous people to learn about the issues and understand the threats to the Tsleil-Waututh Nationâ€™s Territory and culture. The federal government and National Energy Board are attempting to fast-track the Kinder Morgan pipeline expansion. A Tribe Called Red (the most popular Indigenous music group in Turtle Island) comes to Tsleil-Waututh to stand with us to protect our Territory from tarsands threats.

The Winter Gathering also helps inspire connections between different Coast Salish Nations (from Tsleil-Waututh to Sto:lo to Tswwassen) as well as Urban Indigenous people, non-Indigenous, environmental groups and other opponents of Kinder Morgan. With many speakers the participants over the two days will learn more about Coast Salish Peopleâ€™s spiritual, cultural, and legal rights to the Salish Sea.

An evening launch event to connect to the language, culture, land and waters of the Tsleil Waututh and Coast Salish Peoples. This will feature a light dinner, plus speakers and breakout sessions on building crosscultural alliances. Learn how settlers to Unceded Coast Salish Territory are standing as allies to defend the Salish Sea.

Part II: Salish Coast LIVE w/ A Tribe Called Red – Friday, Feb 21, Doors 8pm Commodore Ballroom | THIS SECOND SHOW ADDED
After the Saturday night show sold out quickly, a second show has been added for the more than 1000 guests! With opening acts, Tsleil-Waututh video images, and videos describing the threats of tarsands and pipeline expansiÃ³n and oil tankers in the TWN Territory.

Part III: Walk, Paddle & Sacred Fire – Saturday, Feb 22, 1-5pm, Whey-ah-Wichen/Cates Park
An exciting wintery afternoon of programming brings us on the land and water at Whey-ah-Wichen. Directly facing the Kinder Morgan pipeline and oil tanker terminus, a Fire Ceremony will be held with Mike George. Traditional canoes will be on the water with Takaya Tours. A ceremonial 1-hour Walk will lead back to the Tsleil Waututh Community Centre lead by a Tsleil-Waututh youth banner and lead by TWN Elders and members of Council. It is expected 250-300 people will participate.

A special all-ages community performance by A Tribe Called Red, dinner, speakers and a full house in the Community Centre. Here is an introduction to the most popular Indigenous musical act touring Turtle Island today!… and they are coming to TWN!

Part V: Salish Coast LIVE w/ A Tribe Called RedÂ – Saturday, Feb 22, Doors 8pm Commodore Ballroom |Â ALL TICKETS SOLD OUT
This show was so popular it sold out before posters were even put up! A second show will be added on Friday night (see above). 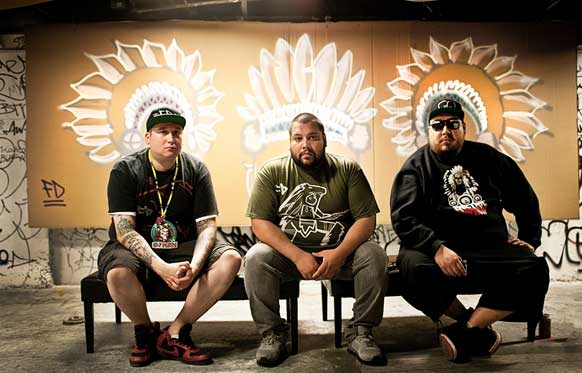 A Tribe Called Red – In a sense, ATCRâ€™s music is the soundtrack to a contemporary evolution of the pow wow: their Electric Pow Wow events in Ottawa showcase native talent and aboriginal culture. Within a couple of years theyâ€™ve become the face of an urban Native youth renaissance, championing their heritage and speaking out on aboriginal issues, while being on top of popular music, fashion and art. DJ Bear Witness doubles as the crewâ€™s visual artist and creates stunning, political and sometimes humorous videos that incorporate film and pop culture references to native people and reclaim the aboriginal image. In 2013, A Tribe Called Red released their second full-length album, Nation II Nation in Canada and in the USA on Tribal Spirit Music. The album was nominated on the shortlist of the Polaris Music Prize as one of the 10 best Canadian album of the year and 4 APCMAs (Aboriginal Peoples Choice Music Award) for best group, best producer, best album and best cover art.â€