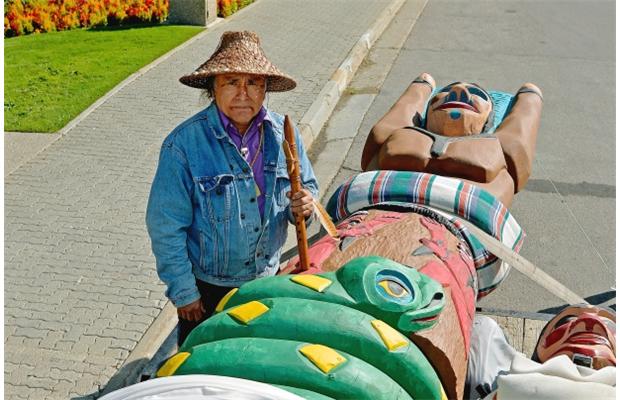 Lummi Nation carver Jewell James poses with a totem pole that he carved and is transporting to the Beaver Lake Cree Nation where it will remain. James stopped at the Alberta legislature on Friday, Sept. 5, to take part in a rally against fossil fuel projects in North America. Photograph by: Larry Wong, Edmonton Journal

Published September 5, 2014 in the Edmonton Journal

EDMONTON – For the last three weeks, the same thing has happened everywhere. On the highway, curious motorists have slowed down and stared. In communities along the way, people have flocked around Jewell Jamesâ€™ massive totem pole, run their fingers along the smooth western cedar, and said a prayer.

And so it was that the sacred healing pole James carved over three months this summer arrived in Edmonton on Friday, nearing the end of an 8,000-kilometre journey.

Hauled on the back of a flatbed truck, the seven-metre-long sculpture has travelled from the Lummi Nation in northwestern Washington to Alberta via Idaho, Montana, South Dakota and British Columbia.