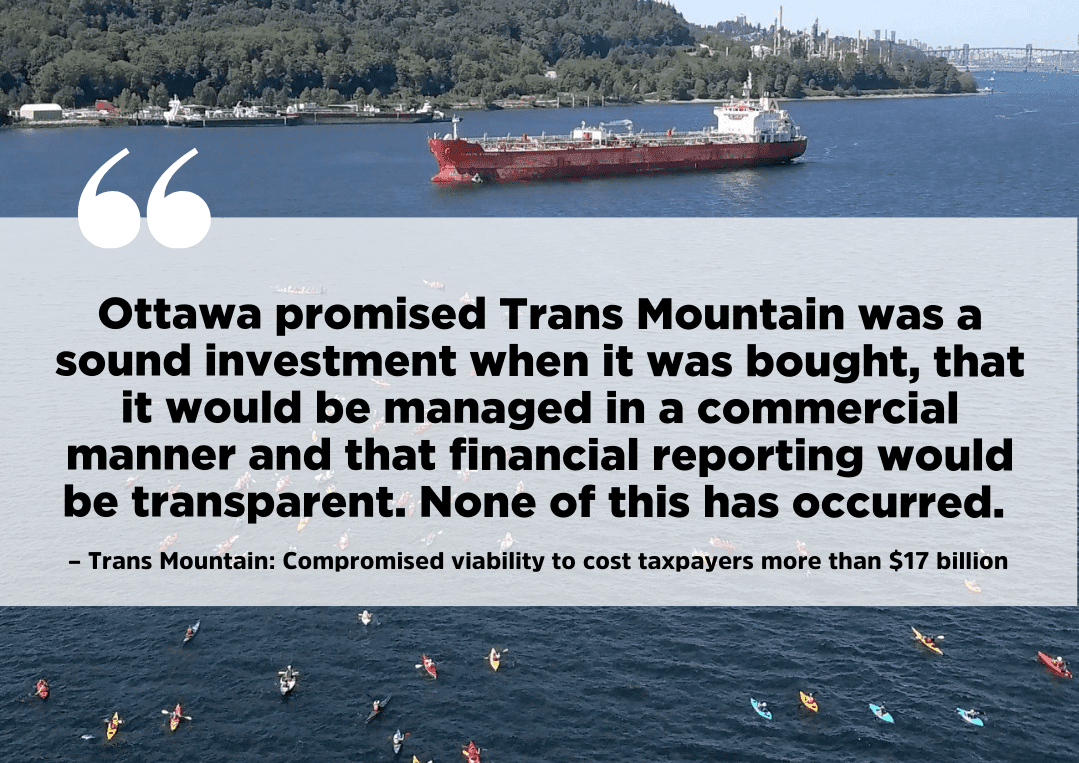 Today, economist Robyn Allan and West Coast Environmental Law (WCEL) released a scathing report that finds the Trans Mountain Expansion project (TMX)  will saddle Canadians with $17 billion in debt. The report also reveals how vast sums of public money continues to be spent on the project despite government claims otherwise. The report demonstrates that the Canadian government has hidden the true costs of Trans Mountain through “clever corporate structures, accounting wizardry, misleading cash flow analysis and toll methodologies that heavily subsidize oil producers,” including creating a shell company for Trans Mountain, to make it appear as though the pipeline is less of a financial loss than it is. Canada had claimed that violating Tsleil-Waututh’s Indigenous rights could be justified by the economic benefits that the pipeline would return to Canada. This report confirms in impeccable detail what Tsleil-Waututh Nation (TWN) and many others have been saying for years: Trans Mountain is not economically viable and will not return a profit to Canadians. Since 2015, report after report has indicated that the economic case and the need for TMX has crumbled:

Now that the business case has evaporated into a dark cloud of debt we all will be sitting under for years to come, there is no longer any justification for this project and it should be cancelled. In this era of COVID-19 recovery, economic uncertainty and climate crises  hitting Canadians every couple months, the TMX project makes no sense. Canada’s future requires climate action and reconciliation, not more pipelines and debt.

This project is being built without the consent of TWN, a violation of our inherent and constitutionally protected Indigenous rights. It poses a great risk to our culture and identity. It threatens the endangered Southern Resident Killer Whales and the deeply sacred relationship we have with them. And it will take Canada further down the path towards climate catastrophe. Prime Minister Trudeau’s government recognized these impacts in approving and purchasing the project in 2019, but justified the approval, claiming the project was in the public interest, based on the flawed argument that economic benefits would be returned to Canada, including the nonsensical plan for profits from this oil pipeline to fund Canada’s green transition. The government promised that “every dollar the federal government earns from this project will be invested in Canada’s clean energy transition.” (https://pm.gc.ca/en/news/news-releases/2019/06/18/trans-mountain-expansion-will-fund-canadas-future-clean-economy).  Where does climate funding stand now that there are no profits and the project will actually cost Canadians $17 billion dollars?

While Indigenous rights are protected under Canadian and international law, Canadian law has deemed that Indigenous rights can be violated should the federal government have a compelling rationale. Canada had justified the infringement of Tsleil-Waututh rights by claiming the economic benefits offset the impacts. This rationale has always been on shaky ground; this latest report yet again demonstrates that there is no economic case for this pipeline, which over time has been used to justify pushing this pipeline through the heart of TWN’s territory without TWN consent. Tsleil-Waututh continues to watch the Trans Mountain pipeline and marine terminal construction from our kitchen windows. This pipeline instead provides Canadians with $17 billion of debt which Canadians will be on the hook for.