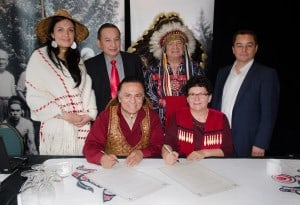 TSLEIL-WAUTUTH/COAST SALISH TERRITORY,Â VANCOUVER, BC,Â April 19, 2013 – A group of influential Indigenous leaders joined ChiefÂ Maureen ThomasÂ and Council of the Tsleil-Waututh Nation in the signing of an International Treaty to protect land, water and indigenous way of life against the tar sands projects. With ratification from Keystone XL, Enbridge Northern Gateway, Enbridge Line 9 and now Kinder Morgan opposed nations, the International Treaty to Protect the Sacred from Tar Sands Projects effectively closes off all exits for tar sands oil to international markets.

The International Treaty to Protect the Sacred from Tar Sands Projects was signed by Tsleil-Waututh ChiefÂ Maureen ThomasÂ andÂ Jewell JamesÂ of the Lummi Tribe. The Treaty was created by the Yankton Sioux and Pawnee Nations and has since been signed by more than 10 Indigenous Nations since its creation inÂ January 2013. The Tsleil-Waututh is the first Nation to sign the Treaty opposing Kinder Morgan.

“The Tsleil-Waututh Nation have a sacred trust, a responsibility to care for our lands and waters,” said Tsleil-Waututh ChiefÂ Maureen Thomas. “By signing this Treaty, we assert our right to protect our way of life, and to partner with other impacted Nations and Tribes who are taking a stand against tar sands projects. We hope this treaty will send a strong signal to Kinder Morgan and other pipeline companies, that there will be no exit for tar sands oil.”

“The Assembly of First Nations strongly supports Tsleil-Waututh First Nation’s emphasis on partnerships with the surrounding community and actions to enhance relations with fellow Coast Salish peoples and with other indigenous peoples to address common issues,” said Assembly of First Nations National Chief Shawn-A-in-chut Atleo. “This Treaty and these actions represent the implementation of key provisions of the United Nations Declaration of the Rights of Indigenous Peoples at a time when First Nations, across the country, are shaping the future of development, sustainability and protection of their lands as necessary. This treaty advances the standard of free, prior and informed consent and ensures that indigenous peoples are coordinating and supporting one another in the advancement of their rights and responsibilities.”

The Tsleil-Waututh Nation is a growing community of 500 located on the north shore of the Burrard Inlet near the neighbourhood of Deep Cove. Tsleil-Waututh traditional territory with its land and waters has been home to the Nation since time out of mind and encompasses approximately 190,000 hectares (720 square miles). The Tsleil-Waututh Nation is not opposed to development, rather it focuses on sustainable projects and methodologies and has been successful in economic development for 20 years.