North Vancouver, B.C. Coast Salish Territory: September 29, 2013 â€“ Tsleil-Waututh Nation unveils a gift from master carver Jewell James of the Lummi Tribe.Â  Â This unique Totem will stand tall in the Tsleil-Waututh community as a permanent symbol of solidarity among Coast Salish Nations opposing destructive fossil fuel projects like Kinder Morganâ€™s project to twin the already existing pipeline that runs from Albertaâ€™s tar sands to Burnabyâ€™s Westridge Terminal which will increase oil tanker traffic along the West Coast. This will have a devastating impact on both the Tsleil-Waututh Nation, people of the Inlet, and the Lummi Nation, people of the Sea.

â€œIn accepting this wonderful gift of unity, we are also sending a clear message to Kinder Morgan: Kwel hoyâ€™ â€“ meaning We Draw the Line in the traditional Lummi language,â€ says Chief Maureen Thomas, Tsleil-Waututh Nation. â€œWe will do what it takes to protect our community, our land and our water from oil spills, and to heal the land and water from the harm Kinder Morgan and its predecessors have already done.â€

The journey of this totem pole has connected people by standing together in solidarity with one another to protect their sacred lands and waters of their ancestors. Uniting First Nations across North America sends a strong message that we are one, and we will stand together to protect our sacred Mother Earth.

â€œWe come in peace with this gift, which affirms our unified stand to protect the Salish Sea from the Kinder Morgan Trans Mountain proposal and other destructive fossil fuel projects,â€ says Jewell James, carver of the pole and Director of the Lummi Nationâ€™s Sovereignty and Treaty Protection Office. â€œThe devastation of an Exxon-Valdez like oil spill will know no international boundaries.

Earlier this year, with Kinder Morganâ€™s plan to triple the volume of bitumen transported by tanker through the Salish Sea on the horizon, the Tsleil-Waututh and Lummi Nations joined other Coast Salish nations in signing the International Treaty to Protect the Sacred from Tar Sands Projects. The Treaty commits tribal signatories to â€œmutual, collective, and lawful enforcement of our responsibilities to protect our lands, waters, and air by all means necessary.â€

About Tsleil-Waututh Nation:
Tsleil-Waututh Nation is a progressive and vibrant Coast Salish community of approximately 500 members. The Nation is located along the shores of Burrard Inlet in North Vancouver, B.C., Canada, across the Inlet from the Burnaby terminus of Kinder Morganâ€™s Trans Mountain pipeline. 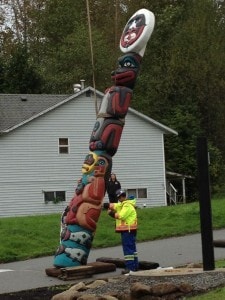 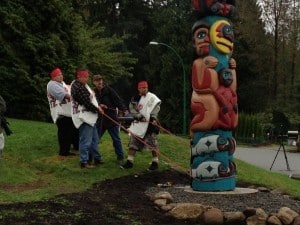 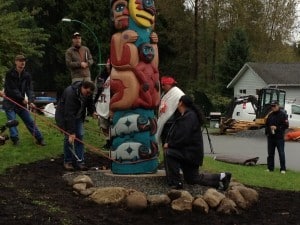 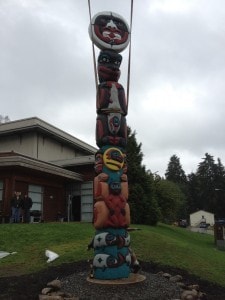