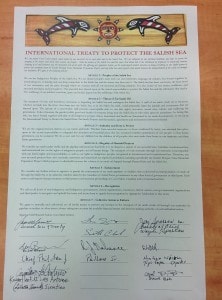 The treaty prohibits the increased transport of tar sands products through the Salish Sea and specifically makes the Kinder Morgan Trans Mountain Expansion Project illegal in Coast Salish Law. The treaty contains a provision in which the signatories agree to take collective action, if necessary, to enforce the protection of the Salish Sea under Coast Salish, Canadian or International Law.

â€œBy signing this treaty, we have agreed to mutually and collectively use all lawful means to stop this projectâ€, said Rueben George, of Tsleil-Waututh Nation Sacred Trust Initiative. Â“â€Kinder Morganâ€™s expansion project will never get built.â€Â”

The treaty signing follows a full day caucus of spiritual leaders from affected First Nations who discussed the sacred obligations to protect the Salish Sea.

â€œThe Salish Sea has been our home, the feast bowl of our sustenance, and the place through which we connect with all our ancestral and living relations. Our ancestral laws placed upon us the sacred responsibility to protect the Salish Sea and the tributaries that feed itâ€ said Leonard George, Spiritual Leader of Tsleil-Waututh Nation. Â“â€The Kinder Morgan Expansion Project threatens our unceded Aboriginal Title and Rights to our respective territories.â€Â”

â€œThe spiritual leaders (Siems), are our highest authorityâ€, said Chief Maureen Thomas of Tsleil-Waututh Nation. Â“â€Their wisdom has guided our people for millennia, and this treaty is an expression of our unextinguished and constitutional protected indigenous laws.â€Â”

The treaty signing follows worldwide rallies in the lead up to the UN Climate Change conference this week in New York. Treaty signatories acknowledged this larger threat to humanity.

â€œWe are signing this treaty, not just for our own nations and children, but for the future generations of everyone who makes their homes on our traditional territoriesâ€, said George,. Â“â€We call on our Coast Salish and Indigenous relatives to sign on to this treaty and on all levels of government to recognize and uphold this treaty.â€Â”

A serious oil spill would devastate an already-stressed marine environment and risks collapses in the remaining salmon stocks and further contamination of shellfish beds, wiping out Indigenous fishing and harvesting rights.

We, the proud Coast Salish people stand united by our ancestralÂ ties to each other and to the Salish Sea. We are obligated by our spiritual traditions and laws to ensure the integrity of the waters and lands that sustain our peoples. Now the waters of the Salish Sea and the rivers that drain into it are threatened by proposals to drastically increase shipping of oil and bitumen and the inevitable risk of oil spills. By affixing our signatures hereto, we the undersigned commit ourselves to doing everything in our lawful power to protect our territories from the Kinder Morgan Trans Mountain Expansion Project, and any other tar sands projects that would increase the transportation of tar sands oil through our territories. We agree to the following articles:

We are the Indigenous Peoples of the Salish Sea. We are distinct peoples, each with our own territories, languages & cultures, but bound together by interlocking ties of kinship and our deep connection to the Salish Sea and the waters that flow into it. The Salish Sea has been our home, the feast bowl of our sustenance, and the place through which we connect with all our ancestral and living relations. It is the source of our stories, traditions, and ancestral privileges and prerogatives. Our ancestral laws placed upon us the sacred responsibility to protect the Salish Sea and the tributaries that feed it. The wellbeing of our intellect, emotions, spirit and bodies depend on the wellbeing of the Salish Sea.

The transport of toxic and hazardous substances is degrading the Salish Sea and endangers the Salish Sea. A spill of tar sands crude oil or bitumen, whether on land; into the rivers that drain into the Salish Sea; or in the Salish Sea itself, could irreparably harm the animals and ecosystems that we depend upon. The spectre of a catastrophic spill presents unacceptable risks to our title, rights, resources, sacred sites, culture and wellbeing for generations. It also threatens the greater public good and health of everyone living near the Salish Sea or who relies upon its abundance. In facing this risk, our fate is bound together with that of all Indigenous peoples whose homelands and health are threatened by tar sands development, as set out in the International Treaty to Protect the Sacred from Tar Sands Projects and the treaties, agreements and declarations referenced therein.

We are the original decision-makers on our waters and lands. Whether from unceded territories or those confirmed by treaty, our ancestral laws place upon us the sacred responsibility to safeguard this abundant and beautiful place that has sustained countless generations of our peoples so that future generations can be sustained. We do so not only for our children but the children of all peoples who now make their home in our territories and their future generations.

We consider tar sands tanker traffic and the pipeline infrastructure that feeds it to be illegal as a matter of our ancestral laws, Canadian constitutional law, and international law on the rights of indigenous peoples and all human beings. The transport of toxic materials through our territories is incompatible with our lawful rights and responsibilities as well as our rights as indigenous peoples recognized in international and constitutional law. Therefore, any new tar sands projects that cross our lands, territories and watersheds are expressly prohibited, including specifically the Kinder Morgan Trans Mountain Expansion Project which proposes to drastically increase the volume of tar sands oil shipped through Burrard Inlet and the Salish Sea.

We consider any further action to approve or permit the construction of tar sands pipelines or facilities that could result in transportation of crude oil through the Salish Sea to be unlawful, whether taken by the Canadian or United States governments or any other level of government or third party. Such action could expose that government or third party to enforcement proceedings in Coast Salish, Canadian and/or international law.

We call on all levels of non-Indigenous and Indigenous governments, citizen organizations, businesses, labour unions, non-governmental organizations and third parties to recognize and uphold this treaty and invite them to signify their recognition by signing the Addendum to this treaty.

We agree to mutually and collectively use all lawful means to prevent any increase in the transport of tar sands crude oil through our territories by pipeline or tankers or other means, always taking into account the available financial means and decision-making authority of each individual nation.

Tsleil-Waututh Nation is a progressive and vibrant Coast Salish community of approximately 500 members. The Nation is located along the shores of Burrard Inlet in North Vancouver, B.C., Canada, across the Inlet from the Burnaby terminus of Kinder Morganâ€™s Trans Mountain pipeline.