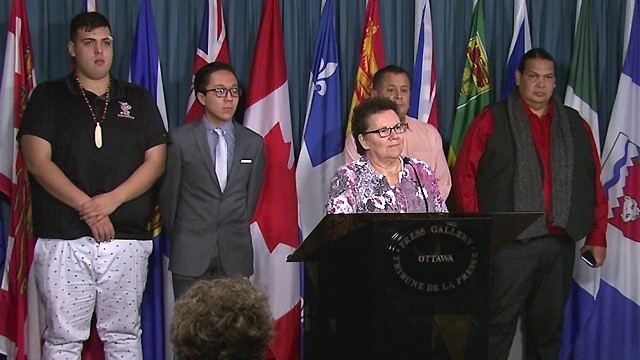 November 28, 2016 (Ottawa) Marking the end of a consultation process with the federal government, Tsleil-Waututh Nation (TWN) Chief Maureen Thomas is on Parliament Hill releasing four new reports. These outline unresolved issues from the consultation that the nation does not yet consider adequately addressed. These reports form the basis for the TWN’s continued rejection of the Kinder Morgan Trans Mountain Pipeline Project.

Chief Thomas asks that the Federal Cabinet not rely on the National Energy Board’s (NEB) May 2016 report and recommendations. They are unfounded and unreliable because the NEB:
• Selectively accepted some evidence presented by Trans Mountain while discounting or ignoring other evidence.
• Failed to provided any basis for its conclusion that “significant adverse consequences of a spill are unlikely” and therefore its conclusion is unfounded.
• Failed to define “likely” and “unlikely,” and an “acceptable” and “unacceptable” level of risk.
• Assessed the impacts of worst case spill scenarios without considering the impacts of smaller spills. Thus, the NEB has omitted consideration of a range of spills that could have significant adverse effects.
• Failed to consider evidence showing that pipeline, storage and terminal spills are likely. The probability of a large pipeline spill (rupture) estimated by Trans Mountain and intervenors over a 50 year operating life is 99.9%, while the probability of a terminal spill over a 50 year operating life is estimated by Trans Mountain to be 77%.

The NEB did not test the existence of markets, actual or potential. There is currently no need for the TMEP and no market for products proposed to be shipped on the TMEP. Current pipeline and rail infrastructure is sufficient to transport oil available for export to market until at least 2025 based on current supply outlooks. A number of new reports in relation to future production, supply, demand for transportation capacity, and market conditions have been released since the NEB hearing record closed on February 17, 2016, and the NEB issued its May 2016 report. These new reports all forecast a greatly reduced supply of crude oil (owing to decreased oil prices) relative to the projection the NEB relied on.

It is inappropriate for the Federal Cabinet to rely on recommendations based on a stale set of facts and circumstances. As the Ministerial Panel commented on the first page of its report “[t]he political, economic, and environmental conditions that prevailed in 2013, when Trans Mountain asked permission to build the pipeline, were much different than in May 2016, when the NEB recommended that the federal government approve the project…” TWN could not agree more with this conclusion.

“This is about our survival. We continue to see our lands and waters subject to further encroachment and pollution,” said Chief Thomas.”  If the federal government directs that the project be approved, it would reopen the many wounds we have suffered as a result of the Crown’s historic disregard for our Aboriginal title and rights.”

The reports can be found here:

Letter sent from Chief Maureen Thomas to the Federal Cabinet on November 25th, 2016.